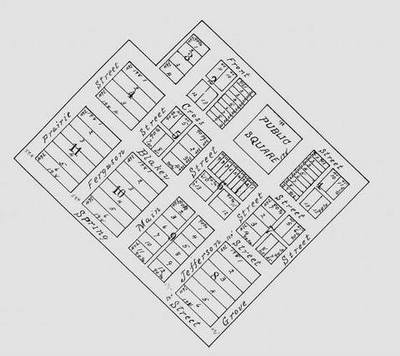 The town was located at the junction of four main roads; the old Military Road which was to become the Butterfield Trail named after a stage line that operated along it from 1858-1861; the Duroc Road coming from the South and a crossing on the Osage River; the Jefferson City Road that led East to Jefferson City; and the Boonville Road, coming in from the north. This put the developing town in an advantageous position for growth, and hotels and businesses soon developed and thrived.
Then, in 1839, Williams decided to move to where the action was bringing his post office with him. Thus, the town was to become known as Cole Camp due to the post office name. From this event, Cole Camp dates its official existence.
After 1835, a wave of immigrants from northern Germany began to settle in to the farming areas northeast of town, bringing with them their Low German language, strong work ethic and Lutheran religion. These characteristics still tend to define the citizenry of the area.
The wave of immigrants became a deluge, and soon large numbers of Germans occupied most of the farmland north, south and east of town.   They came in such large numbers and were such successful farmers that they were to become the predominant group in the area, giving the community the German character it retains to this day.

Cole Camp in the Civil War
Relations between the Anglo-American settlers and Germans had been good in spite of cultural differences. This was to change with the coming of the war when the community became bitterly divided.
The Germans hated slavery and were fervently loyal Unionists while many of the Anglo-Americans retained their sympathies for their Southern heritage. Cole Camp, being at the hub of four major roads at that time, was to become the scene of one of the first battles of the Civil War, June 19, 1861.
The community was to suffer terribly during the remaining four years of war with the terrorism of the bushwhackers and guerrillas, and the armies marching back and forth through the area. This created tensions and hatred that lasted many years after the war ended in what became a divided town and county.

Growth and the Boom Period
After the war, there was another wave of German immigrants who were joined by several families from Bohemia and Poland.
During this time, railroads came through the area and Cole Camp enjoyed a "boom period," with many new businesses opening and thriving.  It was 1880 when the first train came to Cole Camp, a narrow-gauge line that ran from Sedalia to Warsaw, and back. In its hey-day, there were two trains a day.
A second rail line was constructed around the turn of the century but it passed north of town about one and a half miles and offered service between Kansas City and St. Louis.
The railroads also brought in an era of rowdyism reminiscent of the wild-west.   Stories were told of people riding horses inside saloons. Shootings and fights were common occurrences.  One street, where the saloons were located, is still referred to as "Battle Row" by some of the older residents.
The town survived these adolescent years and grew and prospered. By 1890 it boasted a population of 600.
Cole Camp was to move into the modern age with the first telephones installed in 1898. A city owned electrical system began providing electrical power around 1915, albeit only on an intermittent basis. 1893 the first bank was started and at one time the town boasted of having three banks. The Citizens-Farmers Bank, which is still very much in operation, was born out of a merger of two of these banks.  The building which houses this bank was built in 1898. The first automobile was seen on the streets of Cole Camp in 1905.
Around 1900 the city fathers decided something had to be done about the lawlessness and rowdyism so took action to clean up the town.   From here it was to become a clean, well maintained, law abiding and very conservative little community, a characteristic it has maintained until this day.
​
The World Wars and the Depression
The era of prosperity lasted to the Great Depression, interrupted only by World War I that saw many Cole Camp men enlisting or being drafted into service.
Cole Camp prides itself on its annual Fair and boasts it as being one of the biggest and longest lasting of any in mid-Missouri, dating the first Fair from 1916.  It was interrupted for only a few years during the depression and World War II. The pride of the fair is the many beautiful floats created by local churches and organizations that are the highlight of the Fair parades.
Today Cole Camp has settled in and become a beautiful, historic city, proud of its heritage, history and reputation as a neat, clean town.